Tablet on the job II, 10 apps that made it work

In order to do work, we create things, or disseminate information to each other. We write emails, create assets for use elsewhere. We attend meetings and document our progress. Some sell things and use Point of sale (POS) systems to facilitate payment. Most of these tasks can be accomplished easily on a tablet. Many already are, especially in sales where not being tethered to a checkout counter is advantageous. Also, the attention being paid to this space by developers means many different disciplines will have software specially developed for them on a touch platform that meets or exceeds the capabilities of their current software. Its inevitable that laptops and desktops are doomed. However, it’s hard from a user perspective. Will people want to change? I tried working for a month without any access to a desktop computer. This continuation of the story goes through some of the software that got me over the hump of trying to be a good knowledge worker and creator with only an iPad to aid me. 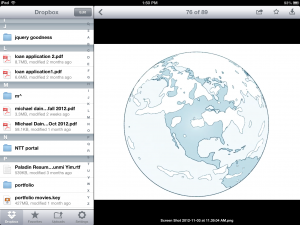 The first hiccup when using a tablet is that there is no file system. Or, if you’re used to such things, creating and modifying files is pretty standard way to feel like you’re doing something productive. The lack of a file system doesn’t mean there isn’t one. Dropbox was, and is, a prominent contender in a general purpose place to store stuff. ICloud, introduced earlier in the year, offers storage for iWork documents that don’t include Garage band and iMovie (for storage reasons?). Programs that create assets usually allow some way to get them in and out, although I found emailing it to myself or others seemed to be the classic method, sharing dropbox folders takes a bit of getting used to. When you work with a traditional computer, you’ll be surprised how much of it is document management, and neither of these changes that metaphor too much, it’s still folders and files. I could mention the second thing missing is a keyboard. If you do a lot of typing, this is another hurdle. You can pair with an external keyboard, or you can get used to virtual keys. I tend to think that voice recognition will get better. Finally we will be able to speak to our computers (ala Star Trek) and have them not just take dictation, but do our bidding (ala Siri). 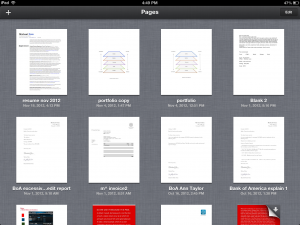 Now that we can make things, what shall we make? The Apple work suite was introduced fairly early and pioneered the tablet as not just a place to watch videos. Numbers, pages, and keynote (to be discussed later) were meant to compete with or best their desktop counterparts. They were pretty successful. One added bonus of Pages is the omnidirectonal screen, in landscape, typing is easy, but in portrait, you can see an entire page as it’s printed. This really is fun when it comes to editing, being able to visualize then move back and forth. 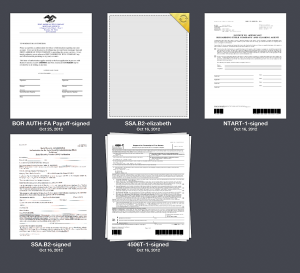 While it may not be the most usual activity, signing and returning mortgage papers or any kind of paperwork is a complete pain in the ass nowadays. Especially since the demise of faxing. Sign now offers a complete focus on one simple task – signing PDF documents.  Niceties include ‘todays date’ and small bits of additional text. Since your signature is easy to create on a tablet, what would normally be a time consuming chore becomes a short task. I did two rounds of this, the first to sign, scan and email took 2-3 days, the SignNow only about 15 minutes.

Writing with Google Drive and docs 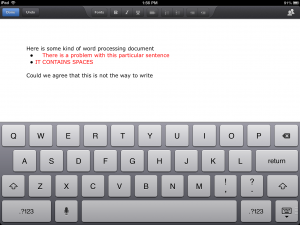 Pages, and any other dedicated writing program (little shout out to iAwriter) have some interesting interface aspects that are unique to the tablet versions, but if you are using the Google Drive to store things, why not author your documents there as well? While the features may be a bit on the basic side, the plus is that that all your efforts are saved in the cloud, and available everywhere. Is this is another sign of things to come as businesses come to embrace cloud storage? While this has been baking for many many years, the tablet may be the device to push this concept into reality. 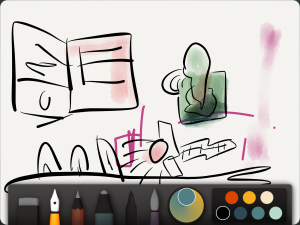 I’m holding out judgement on drawrings. I think there is a lot to be said to being able to make a quick sketch, but I haven’t finger painted in years, so I find it a liitle bit taxing to try and approximate a brush or pen with my finger. On the other hand, the stylus’ I’ve used feel more like stubby erasers than actual pencils. So I stick to the real thing when I’m serious, pencil and paper are not hard to come by. Yet there are some great apps, Paper, being one, that really take advantage of the pad metaphor. If I was in more need of colors and brushes and such I’m sure I would be more receptive. 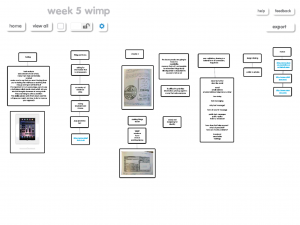 Popplet hits a sweet spot for me, when taking notes, I often struggle to find out the minimum sound bite that helps me use the notes at a later date. If I can discern one, perhaps there is another bigger theme that I can wrap the ideas in after the initial ones are entered. I find notes are about capturing nuggets, then organizing them. It doesn’t work to do this linearly. Enter the world of mind mapping tools, that draw you into creating threads of thoughts.I find them too linear. Popplet solves that by allowing you to move around, link, and add all sorts of different annotations during or after the fact, basically creating a malleable corkboard of sorts. 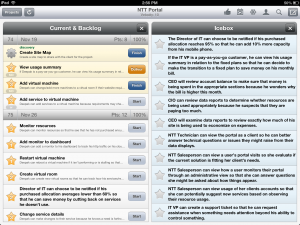 For those agile teams, people that make software, a good project management tool is a lifesaver in a meeting. Pivotal is just one of many ways to author requirements (in this case user stories), but one that is well suited to a touch interface. While the team debates and reviews, a tablet is a perfect form factor to collaborate on wording, and review what is in progress and delivered. This is also a good example of an interface that was engineered to work on both desktop and tablet.

Presenting with keynote and prezi 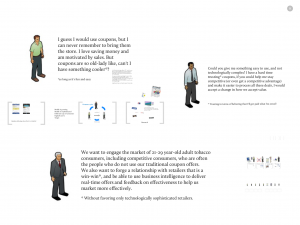 There’s not much in common between Prezi and Keynote. One uses the traditional ‘slide’ approach, along with a good smattering of special effects to make very good looking linear presentations. As a tool, I think it works as good on the tablet as on the desktop. Since text editing is more prominent than authoring, it is a little distracting to have the keyboard take up so much space. Prezi, on the other hand, is somewhat non-linear, and instead relies on authoring a series of ideas, then stitching them together. It also takes advantage of unique rotation and animation effects. While the authoring capabilites are just getting started on the tablet for Prezi, between the two you should be able to get your point across. 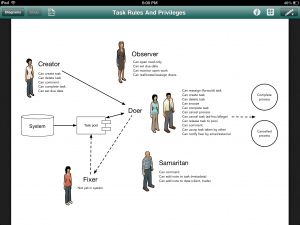 This may be one of the more controversial choices, unlike most of the apps here, this comes with a hefty pricetag (50$) as well as a very narrow focus. Making charts, diagrams and wireframes. It handles all of these in a fairly idiosyncratic way. There are many conventions we are used to within desktop software that struggle to make it to the touch screen. Overall this did come in handy, mainly due to the large library of artifacts available to me over the years of use. New users also get easy access to these libraries, so this could be a wise purchase if you need a tool to draw out precise ideas. 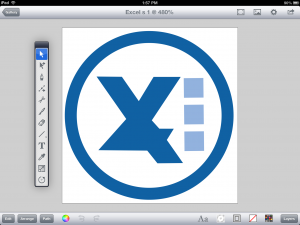 ly, the app that really was a big surprise. I needed to create some icons, and wondered if there were any replacements for the dreaded Adobe Illustrator. And when I mention dread, Illustrator, like Photoshop, has acolytes that swear by it, but newcomers can find them quite daunting. Vector illustration, which uses mathematics to create shapes is the opposite of Photoshop which uses pixels. When picking up this app, I was immediately impressed that fingers could actually do most of the work. You were not ‘drawing’ in a traditional sense, but creating and modifying shapes. They were also nice enough to put the tools palette on the left hand side so I was able to use  both hands! Also, the pinch to zoom allowed for extremely detailed work then rapidly switching to overview, this really made it much easier and tactile, and enjoyable.

I reiterate that it shouldn’t be too long before the desktop is replaced by the tablet. While it will be disruptive, it should settle down since much as the abilities afforded to us by smartphones has also been assimilated into our expectations of how to accomplish tasks on touch screens. The real plus is not to just feel productive, but through the experience I felt much deeper connection to the processes I was creating,  that is a hallmark of working with your hands.